Spiritual Connections: Living in the Flow of God’s Love 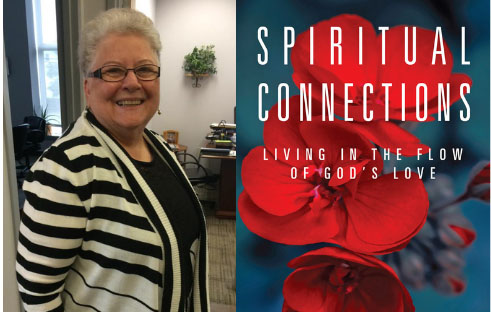 Spiritual Connections: Living in the Flow of God’s Love

This is an engaging spiritual autobiography of Nora Spurgin, who joined the Unified Family in New York in 1967, and served in many central positions as the movement led by Reverend Sun Myung Moon developed into a new global culture. Nora’s identity is shaped by her connections to others in her lifelong pursuit to be in the flow of God’s love.

Her story begins with her ancestors who came to America for religious freedom. Her sixth great grandfather authored Confessions of Faith, which is still used for religious instruction among the Mennonites. She grew up in Lancaster County, Pennsylvania in a farming community with large families, connected to her parents, siblings, extended family, and nature. Life was a mixture of hard work, fun play, and worship of God. Personal responsibility and maintaining the community was stressed. Her community was self-sufficient. Nora learned to design and sew clothes and her father even taught her every step in building a house!

At a young age, Nora’s curiosity prompted her to ask questions about her faith in comparison to Catholics and others. She studied the people she met, wanting to learn behavior patterns and whether people were genuine or putting on a façade. She learned to approach others with confidence. While Nora wanted to learn fastidiously, her parents believed outside education would corrupt children’s faith. She dropped out of high school after one year and worked at home and in a sewing factory until she turned twenty-one and a free adult. Then she grabbed lots of books, studied, passed the GED exams, and set out on the world.

A Mennonite Voluntary Service program caring for children of migrant workers in Florida exposed Nora to poverty and other cultures and broadened her faith. In college she loved philosophy and history. On weekends she visited and served people in Appalachia, and experienced charismatic spiritual events. Then she went on for her Master’s degree in Social Work at New York University. The intellectual confrontations and big city life were far different than life on a simple Mennonite farm. Through all her encounters, she continued her search for connections to God and was prepared to meet the Unification Church.

At a religious meeting at Columbia University, Nora met Barbara and Diane, who had returned from six month’s training in Japan and opened a teaching center in New York. They had both been Quakers. She studied the Divine Principle with them and joined in New York in 1967. After completing her graduate work at NYU she moved to Washington, DC to further her religious study with Young Oon Kim, an early Korean Missionary and theologian sent by Reverend Moon to spread his teachings. There she engaged in interfaith dialogue with Dr. George Lamsa, of the Eastern Church that began in the area of Palestine before the Eastern Orthodox Church. He had translated the Bible into English from the original Aramaic language.

Nora first met Reverend and Mrs. Moon in Washington, D.C. in 1968 and watched the first blessing ceremony of 13 couples in America. In 1970, she was sent out as a missionary to Kansas City, Missouri. She took a job at a Veterans Administration Hospital by day and taught Divine Principle lectures in the evening. While there, she was matched to Hugh Spurgin and then blessed in a ceremony for 777 international couples in Changchung (Metropolitan) Gymnasium in South Korea. Hugh then joined her in Kansas City where they began married life. The next year they were sent to Berkeley, California, to help take care of a fast-growing center, and next sent to Philadelphia where their first child arrived.

A new stage for the movement began when Reverend Moon announced his first public speaking tour in America, and Philadelphia was the second city on his schedule. A mobile team of fifteen people arrived in advance to help prepare for the event. Father and Mother Moon stayed with them in their center. By October 1972, the Unification Church legally organized as HSA-UWC, purchased the Belvedere Estate in Tarrytown and the Moon Family had a permanent home in America. Next, Hugh and Nora were sent to the upper Midwest region, headquartered in Minnesota for three years, to guide church growth and host speaking engagements by Reverend Moon on his American tours. They acquired a school in Greenville, Iowa to serve as a homebase and a Divine Principle workshop center that brought in many new members in these years.

In 1975, Nora participated in one of Rev. Ken Sudo’s large training programs in Barrytown, New York, after which she was sent out as a national itinerary worker, visiting new centers and members across the country. This meant large periods of separation from her family who lived at the Gatehouse at Barrytown with another family. It was a challenging period when “deprogrammers” were kidnapping new members and challenging their faith. While at Barrytown, Nora also worked with other mothers to set up Camp Sunrise for educational training and activities for the children, who were now school age.

Nora’s experience went international in 1978 when she was called to be part of an itinerant team of three people who visited the American, German, and Japanese missionaries and church centers in Australia, India, Iran, Thailand and Hong Kong.

In 1979, Nora’s fourth and last child was just one month old when she was asked to help prepare materials for large international matchings and the blessing of 2,075 couples at Madison Square Garden, July 1, 1982. After that she and Betsy Jones created the Blessed Family Department and published the Blessing Quarterly. Lots of time was spent counselling couples who came from very different cultural backgrounds. Finally, in 1983, working out of New York City, Hugh and Nora were able to buy their first private home across the river in New Jersey. Nora’s book goes into detail about raising her family and the national and international connections she helped make for her children during these years.

In 1991, as the Soviet Union collapsed and faced a moral vacuum, Nora went to Lithuania on a summer mission to teach about democracy and character. When she returned, the Church, undergoing financial hardship and budget cuts, closed several departments and laid off Hugh and Nora. They had to declare bankruptcy and moved to their “hometown providence” Pennsylvania near Nora’s family to find new jobs and an apartment.

It wasn’t long before Nora was asked to lead a new project. Mrs. Moon had founded the Women’s Federation for World Peace (WFWP) in Seoul in 1992. She asked Nora to become the American president of this new organization. Nora was challenged to set up a new non-profit corporation with regional chapters in America that would host Mrs. Moon on a eight-city speaking tour. Then Nora accompanied Mother Moon on an international WFWP tour to England, Germany, Austria, France, Russia, and China. The WFWP developed sisterhood ceremonies, where women of different countries and backgrounds would walk bridges of peace in a ceremony. They would then work to become bridges of peace between their countries. Former US President George H. W. Bush and his wife Barbara attended several of these events. In August 1995, WFWP scheduled an event at the Fourth World Conference on Women in China and arranged for Maureen Reagan, daughter of Former President Ronald Reagan, to give a keynote address on family values. Nora even made a trip to North Korea with a WFWP tour group. By 1997, the WFWP had become quite visible and was granted consultative status with ECOSOC at the United Nations. Nora handed over the Presidency of WFWP to Alexa Ward.

In June 1997, Nora and the family followed Hugh to Bridgeport, Connecticut, where Hugh had become President of a residential high school, New Eden Academy for children of Unification Church members. As it grew in reputation, the school opened its doors to nonmembers and was renamed Bridgeport International Academy (BIA) and eventually received a grant to buy a building. In addition to dealing with student problems, accreditors, and building inspectors, after Hurricane Sandy she had to deal with FEMA and clean up from flooding. The school continued to flourish. After working 19 years at BIA, Nora retired as the principal in 2016.

This brief summary of the highlights of Nora’s life and missions just touches the surface of this spiritual autobiography rich with stories of the people she met, the connections she made, the challenges faced, and the successes achieved. It is an in-depth story of a wife and mother who was able to raise four children while helping Reverend Moon’s activities in America and the world.

Reading Spiritual Connections: Living in the Flow of God’s Love will both enrich one’s knowledge of the history of the Unification Church in America and show how people like Nora, committed to feeling God’s heart and serving God’s will, were able to plant seeds for a new world culture. Teaching the Divine Principle, practicing Blessed Family life, counselling others, creating schools, and public service activities that touched US presidents and the United Nations make Nora’s a rich and fruitful life. I highly recommend this book for spiritual seekers, parents, and public servants. You will come away inspired.