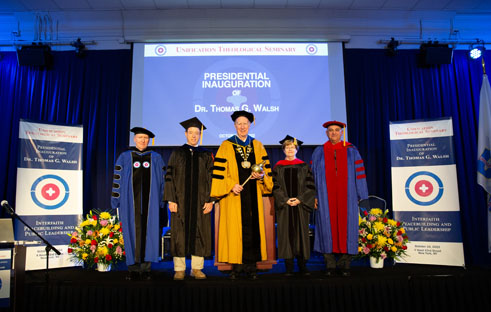 “The core vision [of UTS] remains unchanging, even if some particulars are changing,” said Dr. Walsh in his inaugural address. “I am convinced of the enormous opportunity and huge potential for growth going forward ... Together, we can build a world-class graduate school of ministry and public leadership, with men and women who develop the spiritual, moral, and intellectual capacities that impact the world — this is the mission of UTS that will continue and be expanded in the years to come.”

Some 120 participants on Zoom and 50 in-person attendees joined the inaugural ceremony held at the 43rd Street building in New York City. The program featured congratulatory messages from a range of distinguished leaders from around the world. Dr. Walsh, who also serves as chairman of the Universal Peace Federation (UPF), was presented the UTS presidential medallion and mace by Dr. Ward.

“I feel very privileged to work with [Dr. Walsh] at this time,” said Dr. Ward. He said the many shared testimonies from various dignitaries show Dr. Walsh as “a friend, a confidant, a person they can trust, believe in, and want to work with.”

With a PhD from Vanderbilt University in Religious Studies and Ethics, Dr. Walsh has traveled to more than 120 countries, contributed to countless volumes of religious text, advised True Mother on the global work of UPF, and has passionately educated the next generation as a UTS professor of religion and peace. Dr. Walsh said he personally benefited from the words and wisdom of past UTS presidents, such as Dr. Hugh Spurgin and Dr. Theodore Shimmyo, and holds deep gratitude and appreciation for his many colleagues. “I admire all of you,” he said. “I'm humbled and honored to receive so many words of congratulations ... and messages of sincere appreciation of the [UTS] founders.”

“I believe the best days are yet to come,” she said, as she described Dr. Walsh as “a man of character” with “unwavering dedication.” She commended Dr. Walsh’s transformative work with UPF, as did other leaders including Dr. Young-ho Yun, director-general of UPF International. He said Dr. Walsh’s role as UTS president is now “an opportunity to take a big leap forward.”

“The UTS founders, Rev. Sun Myung Moon and Dr. Hak Ja Han Moon, knew there was nothing more important than education to restore the world,” said Dr. Yun. “That is why they made tremendous effort to establish UTS.” He called the seminary “an historic turning point,” which will raise future international leaders who can “effectively and wisely take responsibility” for various initiatives in and out of the Unification movement. “Focusing on peace studies and public leadership ... will be the key to raising future generations of leaders,” he said. “[UTS] will be a place of creative convergence and comprehensive education.”

Several leaders said Dr. Walsh’s vast experience in the religious sphere will be a big asset to the seminary. In his video remarks, Bishop Munib Younan of the Evangelical Lutheran Church in Jordan and the Holy Land stated Dr. Walsh’s diverse talents can “advance [God’s] glory in this world.”

“We need to prepare a new generation that understands that everyone has human rights, freedom of religion, freedom of conscience, and freedom of conviction,” said Bishop Younan. Dr. Walsh highlighted that UPF can play a “strong role” in leveraging its relationships and networks with UTS. The graduate school is establishing two education tracks going forward, one focused on divinity and the other on peace studies. Dr. Walsh called the change in seminary leadership and curriculum “a dramatic new chapter in our history, and a new era at UTS.” “We see many encouraging opportunities for developing partnerships,” said Dr. Walsh. “UTS’s restorative vision and practices offer hope.”